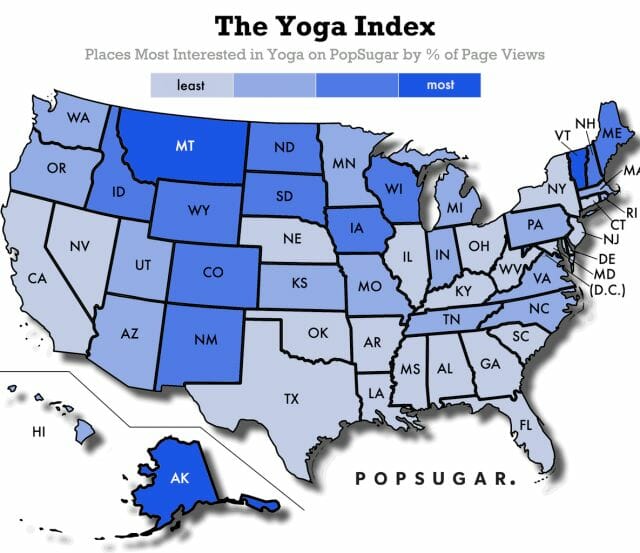 This post is adapted from POPSUGAR a Priceonomics Data Studio customer. Does your company have interesting data? Become a Priceonomics customer.
***
With over 36 million practitioners — 72% of whom are women — yoga is one of America’s fastest growing sports and one of its fastest growing industries.
But where is yoga most popular across the United States? And while we’re at it, in which cities are yoga pants taking over?
We decided to answer these question by analyzing data from POPSUGAR, a Priceonomics customer that is a very large media publisher. Since POPSUGAR measures which types of articles their readers are interested in and where those readers are located, this data set lets us understand where yoga is disproportionately popular.
According to the data, the American cities with the most interest in yoga are Western cities: Denver, Portland, and Salt Lake City. Yoga is less popular on the East Coast and in cultural centers like Los Angeles, New York, and Miami, where people are disproportionately interested in other topics.
And the city with the highest interest in yoga pants? San Francisco.
***
In the first quarter of 2016, a huge numbers of page views on POPSUGAR were for articles about yoga. But that percentage varied significantly across American cities. For example, people in Denver who visit POPSUGAR are more than 50% more likely to read an article about yoga than people in Los Angeles or Miami.
The following table shows the 40 cities whose residents are most likely to read articles about yoga compared to other POPSUGAR articles. 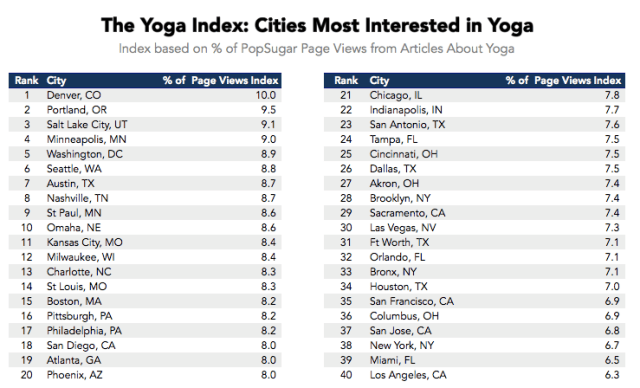 Data Source: POPSUGAR
Denver, which consistently ranks as one of America’s healthiest cities, comes out on top as the most yoga-crazed city. It is followed by other cities known for their residents’ active lifestyles, like Portland, Salt Lake City, and Minneapolis.
New York, Miami, and Los Angeles rank at the bottom of the list. In these cities, readers are more interested in articles about fashion and entertainment than yoga.
We also mapped out the popularity of yoga by state rather than city. The state-by-state results are less idiosyncratic, with one exception: Vermont. 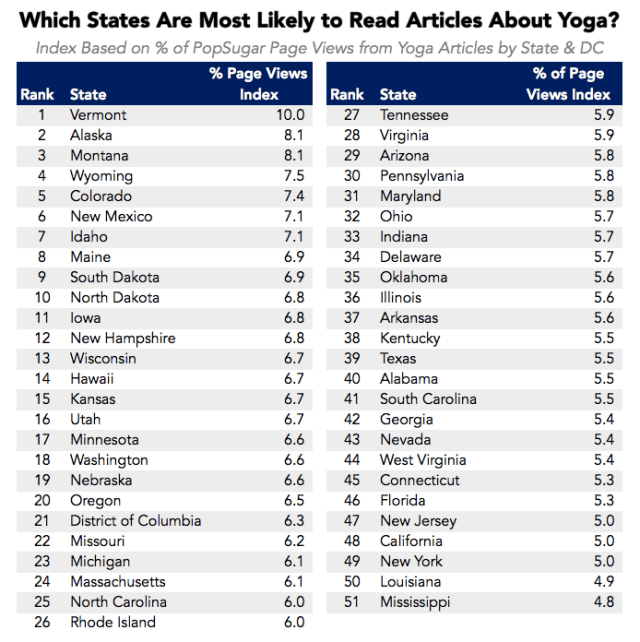 Data Source: POPSUGAR
Vermont is the number one state by a long shot. The state, which is known for its countercultural tendencies, is home to some serious yoga lovers — and even to an annual yoga-centered festival.
After Vermont, Alaska and the states of the Pacific Northwest rank highest. In general, the data shows that interest in yoga is strongest in the West. This contrasts with other sports like running. As the chart below shows, running is most popular among POPSUGAR readers from the East Coast cities of Washington DC and Boston. 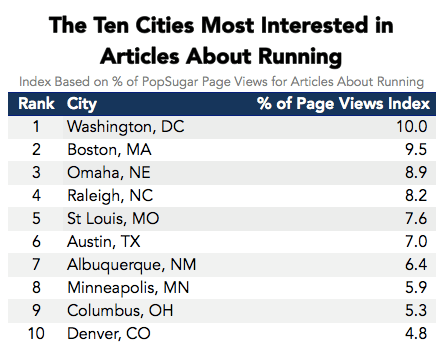 Data Source: POPSUGAR
While yoga’s rapid rise to popularity has changed how many Americans exercise, it has also changed how we dress. The trend of wearing athletic clothes all day — whether you’re exercising or not — has been fueled by the popularity of yoga pants and leggings.
On POPSUGAR, the rise of yoga pants and “athleisure” clothing has led to an increase in the number of articles tagged under the heading “leggings.” These are the 10 cities with the most people reading about leggings and yoga pants. Data Source: POPSUGAR
San Francisco takes the top spot, followed by Milwaukee and New York. Californians have embraced yoga pants and leggings—four out of the top ten positions belong to Californian cities!
If there is anywhere where you can expect to see an unusually high number of people walking around in yoga pants, it’s San Francisco. Does this mean that the city, which tops the yoga pants index, is really counterculture or really basic?
It’s a testament to the growth of yoga in America that it’s hard to answer the question.

Note: If you’re a company that wants to work with Priceonomics to turn your data into great stories, learn more about the Priceonomics Data Studio.