International Yoga Day 2022 LIVE News Updates: Along with 15,000 fitness enthusiasts, Prime Minister Narendra Modi is leading a mass Yoga event at the Mysuru Palace grounds in Karnataka on the occasion of International Day of Yoga today (on June 21). The theme for this year’s IDY celebrations is ‘Yoga for Humanity’. The programme, to mark the eighth International Yoga Day, is being held at 75,000 places Read More
Union Minister Meenakashi Lekhi performed yoga at the Vivekananda Beach in Tamil Nadu’s Kanniyakumari International Yoga Day.

Madhya Pradesh Chief Minister Shivraj Singh Chouhan celebrated the International Yoga Day with school children and dignitaries in Bhopal on Tuesday and expressed happiness that the ancient Indian practice of yoga has now spread across the world. He said the people’s priority in life should be to stay healthy.
Chouhan rolled out a mat and performed yoga exercises along with students and some dignitaries at his official residence in Bhopal. The main programme was earlier scheduled at the Lal Parade Ground here in the presence of school children, but rains on Monday evening forced the organisers to cancel the event there.
Addressing the gathering at his residence, Chouhan thanked PM Modi for spreading the importance of yoga in the entire world. The International Yoga Day is now being celebrated in 177 countries across the world, he said. Earlier, only people in India used to practice the yoga to remain fit and healthy, but now the entire world is doing it, Chouhan said stressed that people’s priority in life should be to remain healthy.
Union Minister Anurag Thakur performed Yoga at Sujanpur Tihra fort in Hamirpur district of Himachal Pradesh on International Yoga Day.
Anurag Thakur said, “PM Modi took message of Yoga to every corner of world. People must do Yoga for healthy well-being, healthy society & for stronger India”.

Prime Minister Narendra Modi, who is in Karnataka, attended a digital exhibition on Yoga in Mysuru on International Yoga Day.

Gujarat Chief Minister Bhupendra Patel and Union Minister of State for Finance Dr Bhagwat Karad led a crowd of nearly 7,500 people in performing yoga on Tuesday morning at the Sabarmati Riverfront in Ahmedabad on the occasion of the International Yoga Day. “More and more people have understood the importance of a healthy lifestyle based on yoga and ‘pranayam’ after the coronavirus outbreak,” Patel said addressing the participants.
The CM also said they would make available qualified yoga trainers will be with the help of the Gujarat State Yog Board, established by the state government two years back. As the country is celebrating 75 years of its independence, the Gujarat government has selected 75 prominent places in the state to host the Yoga Day events, Patel said.
(With PTI inputs)
The easternmost deployed Indian Naval Warship, INS Satpura, operating near the International Dateline in the middle of the Pacific Ocean, kick-started the Indian Navy’s International Day of Yoga activities by conducting the Common Yoga Protocol at sea.

The power of yoga is the power of unity for a healthier and prosperous future for all and it is here to stay, President of the 76th Session of the UN General Assembly Abdulla Shahid has said, underlining that the practice offers a holistic approach at a time when the world emerges from the COVID-19 pandemic that triggered a deluge of anxiety and depression. Shahid was addressing a special commemorative event organised by the Permanent Mission of India to the UN here on Monday. He said that the celebration of 8th International Yoga Day on Tuesday under the theme Yoga for Humanity’ could not have come at a more opportune time as the COVID-19 pandemic has upended lives and livelihoods, triggering a deluge of anxiety and depression.
External Affairs Minister Dr S Jaishankar and diplomats of various countries performed Yoga on the eighth International Yoga Day at Delhi’s Purana Qila.

A yoga week will be organised at the Delhi University starting Tuesday to commemorate the 8th International Day of Yoga, officials said. As a part of the yoga week, a programme will be organised in the Multipurpose Hall of the University Stadium on June 22.
Union Culture and Parliamentary Affairs Minister Arjun Ram Meghwal will be the special guest and Yoga Guru Ramdev will be the chief guest during the June 22 event, the DU said in a statement. This ceremony, being held during the ‘Azadi ka Amrit Mahotsav’ and the Centenary Celebrations of the University, “will be quite grand,” it mentioned. Professor K P Singh, associate professor DU Department of library, said the opening and closing ceremonies of the yoga Week will be organised at Gandhi Bhawan. During this, many dignitaries from the university as well as outside will be present. The University of Delhi is celebrating the Centenary Year of its establishment, with the year-long celebration, which was inaugurated by Vice President M Venkaiah Naidu in May. (Image: ANI)
Ramdev: “The nation is celebrating Azadi Ka Amrit Mahotsav and we should aim to keep our body free of any illness. And for this one should do four-five Yoga asanas every day. Yoga is for everyone and is not associated with any religion or political party.” 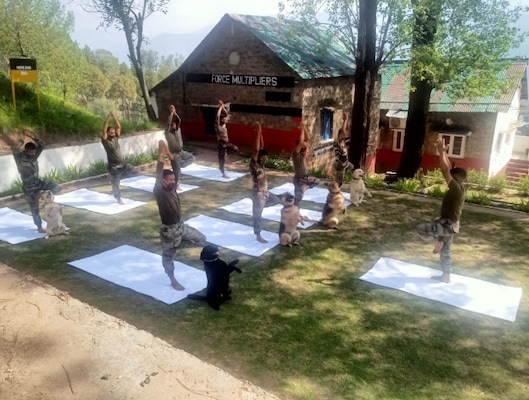 President Ram Nath Kovind performs Yoga at Rashtrapati Bhavan on #InternationalDayofYoga
"Yoga is a part of our ancient Indian heritage. India's gift to humanity, it is a holistic approach to health and well-being, balancing our mind, body and soul," he says. pic.twitter.com/ZFEP4kJvie
— ANI (@ANI) June 21, 2022 (Image: ANI)
From Shilpa Shetty Kundra, Kareena Kapoor Khan to Milind Soman, there are many Bollywood celebrities who are reaping the benefits of yoga for a long time now. Read the photo story here.
Around 25 crore people across the world are expected to participate in various events, doing yoga in unison towards better health and wellness for all, Union Ayush Minister Sarbananda Sonowal, who has joined PM Modi in Mysuru, had earlier said. Two days ago, PM Modi had urged citizens to make yoga a part of their daily life. He said that there are “countless benefits” of the fitness form. On May 29, Modi, during his address at the 89th edition of his monthly radio program ‘Mann Ki Baat’, had urged people to mark the upcoming International Yoga Day at some iconic place of their town, village or city. He had also called Yoga ‘perfect blend of gyaan, karm and bhakti’ (devotion).
Sonowal said that a flagship programme in coordination with the Ministry of External Affairs is being organised for a mass Yoga Protocol world over on IDY 2022 following the movement of the Sun. “The programme will commence at 3 AM IST and would continue till 10 PM. Starting in Fiji, Brisbane, Australia and New Zealand, it will end in San Francisco, USA and Toronto, Canada,” he said. “Seventy-nine countries and United Nations’ organisations are onboard for the programme with full-hearted support of Indian missions abroad. The programme is being telecast live on DD India for 16 time zones,” Sonowal said.
The minister said that mass Common Yoga Protocol (CYP) demonstrations will be conducted at 75 iconic locations branding/showcasing India through IDY activities. This programme would be part of ‘Azadi Ka Amrit Mahotsav’. The programme will include a digital exhibition in Dasara Ground, Mysuru on June 21 and 22 to showcase a ‘state of the art’ development in Yoga. “An interactive feature of doing Yoga with PM is also provided, wherein anyone can perform virtually Yoga with animated videos of PM and can take virtual selfie with the PM. “In addition, through an interactive tool the concentration level of an individual can be checked. Further, a static exhibition covering all Ayush streams and Yoga start-up is also organised,” the minister said.
Reports stated that a total of 20 Yoga asanas (postures) will be performed today. As the International Yoga Day is corresponding with the 75th year of Independence, the Centre has decided to perform Yogic exercises in front of the 75 heritage structures across the country. The 20 asanas include vrikshasana, ustrasana, setubandhasana, bhujangasana, pavanamuktasana, shavasana and trikonasana. The event will start with one-minute prayer, followed by relaxation exercises for four minutes. The 20 asanas will be performed for 25 minutes and pranayams will be performed for 14 minutes.
While PM Modi is in Mysore, Defence Minister Rajnath Singh is performing yoga at the IAF base in Coimbatore. External Affairs Minister S Jaishankar is present at Purana Qila in Delhi, whereas Urban Affairs Minister Hardeep Singh Puri is present at the iconic Red Fort.
Union Culture Minister G Kishan Reddy is joining the Yoga celebrations from the Hussain Sagar Lake in Hyderabad, whereas Minister for Information and Broadcasting Anurag Singh Thakur is present in Hamirpur. Law Minister Kiren Rijiju is performing yoga at Dong village in Arunachal Pradesh, whereas Heavy Industries Minister Mahendra Nath Pandey is joining the Yoga celebrations from the iconic Puri Beach.
Railways Minister Ashwini Vaishnaw is present at the Sun Temple in Konark in Odisha, whereas Finance Minister Nirmala Sitharaman is at Jantar Mantar in the national capital. Commerce and Industry Minister Piyush Goyal is at the Marine Drive in Mumbai, while Health Minister Mansukh Mandaviya is at the statue of unity in Kevadia, Gujarat.
Parliamentary Affairs Minister Pralhad Joshi is in Hampi, while Civil Aviation Minister Jyotiraditya Scindia is at the Gwalior Fort. Road and Transport Minister Nitin Gadkari is at the Zero Milestone in Nagpur, whereas Jal Shakti Minister Gajendra Singh Shekhawat is at the Sand Dunes in Jaisalmer.
Minority affairs Mukhtar Abbas Naqvi is in Fatehpur Sikri in Uttar Pradesh, whereas Giriraj Singh is at Har Ki Pauri in Haridwar. Minister for State for Parliamentary Affairs Arjun Ram Meghwal is in Jaipur, Minister of State for external affairs V Muraleedharan is at the Padmanabhava Temple in Kerala, MoS Road and Transport VK Singh is at the Kochi Fort. Minister for State for Defence Ajay Bhatt is at the Wagah border. Minister of State for Science and Technology Jitendra Singh is in Jammu and MoS Health Bharati Pawar is at the Martand Sun Temple at Anantnag in Jammu and Kashmir.
The International Day of Yoga is celebrated every year on June 21, which is also the summer solstice — the longest day of the year. The idea for the day was proposed by Prime Minister Narendra Modi during his speech at the 69th session of the General Assembly in 2014. The aim of International Yoga Day is to spread awareness about the benefits of yoga.
The idea for the day was proposed by Prime Minister Narendra Modi during his speech at the 69th session of the General Assembly in 2014. “Yoga embodied the unity of mind and body; thought and action; restraint and fulfilment; harmony between man and nature; a holistic approach to health and well-being. It was not about exercise, but about discovering the sense of oneness with self, the world and nature,” he had said. For those who practice yoga on a daily basis, it is not just an exercise but a way of living. According to the United Nations, yoga stands as an emblem for creating balance and harmony.
Read all the Latest News, Breaking News, watch Top Videos and Live TV JAC Board Exam Results Kerala Plus Two (+2) Results here.
TAGS
Follow us on
Download News18 App