People may interpret the Quran in a binary fashion as for believers and for non-believers/kafir. While on one hand, the holy book bestows the best of earth and heaven upon the devout followers of Islam, it issues stern warnings and punishments against the kafir. However, the question remains whether the 1.2 billion Hindus are considered believers or kafirs. It is a subject open to debate.
According to Dr. Mike Ghouse, a Muslim author, punishments and warnings as propounded by the Quran, should be understood against the historical perspective of a nascent religious community fleeing persecution. Islam strictly prohibits wars or attacks on others, but if people’s belief system and their way of life feel threatened, they would defend their rights to live their lives.
Here, two Islamic experts concluded that
This is certainly a progressive interpretation of the Quran. It is hoped that other Islamic faith leaders will endorse such interpretations to help build bridges between the two communities.
In this article, three “independent” views are presented–two by Muslims and one by a Hindu. It cannot be ascertained whether they all endorse each other’s perspective or not.
–By Imam Iftekhar Hai
In every religion, there are interpreters that take a liberal and pluralistic view as well as those that take a non-inclusive view.
Living in India for 22 years has taught me there are several sects and several interpretations to Holy Scriptures. I am raised in a very pluralistic thinking household hence I have never considered a person of any other faith as Kafir or non-believer.
Going to a Catholic missionary school in Mumbai, India I learned Jesus’s saying: Do not Judge others lest you not be Judged.
However, in 1965 I moved to Karachi, Pakistan to find a job and I ended up living in Pakistan for four years. There the interpretation of Quran and Hadith were more on excluding people of other faiths. The only right religion is Islam and Muslims are the only chosen people to spread that message to other religious groups. I cannot agree with those non-exclusive thoughts and ideas.
In 1969 I moved to San Francisco, USA and ended up obtaining American citizenship. I have been living in the USA for the last 53 years. During the last 45 years I have been involved in politics and the interfaith movement in the San Francisco Bay Area.
I see these days, great changes and reforms are happening among American Muslims. 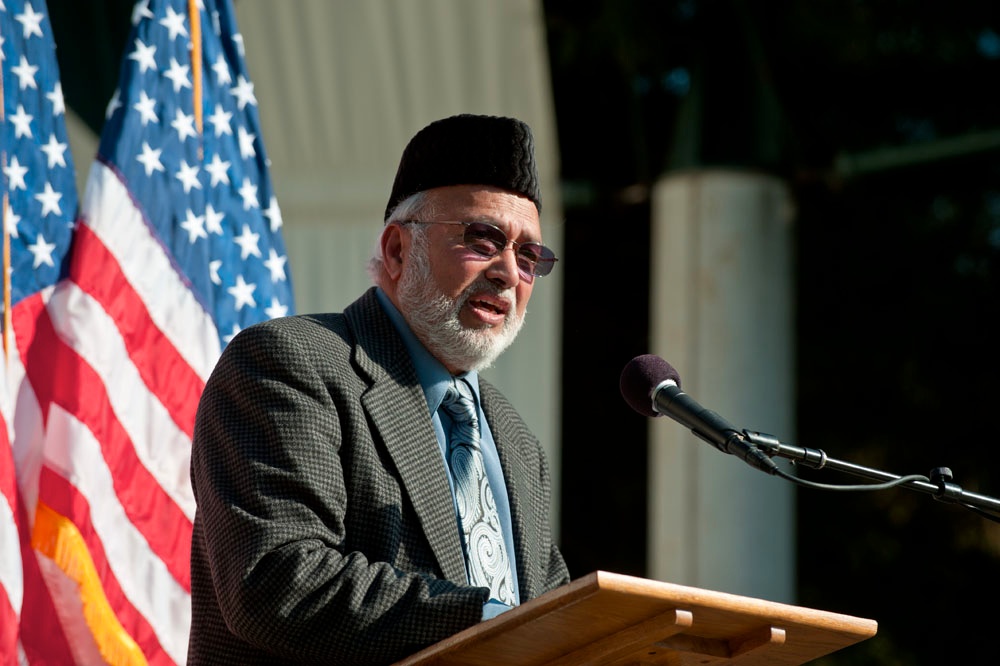 Imam Iftekhar Hai is a founder and President of United Muslims of America Interfaith Alliance. Read more of his views here. 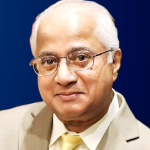 Dr. Mike Mohamed Ghouse is a Social Scientist, Public Speaker, thinker, author, newsmaker, and interfaith wedding officiant. He is deeply committed to Pluralism in Religion, Politics, and Societies along with Human rights, and religious freedom. He is the founder and president of the Center for Pluralism, Director at World Muslim Congress a think tank and a wedding officiant at Interfaith Marriages. His new book American Muslim Agenda is available on Amazon and “Standing up for others” is coming soon. He is committed to building cohesive societies and offers pluralistic solutions on issues of the day.

–Dr. Dilip Amin
It is understanding and respect for each other’s religious beliefs that can bring peace and harmony in today’s communally fractured world. Concepts and words such as Kafir and heathen have derogatory connotations and it would be inappropriate to reduce the entire population of 2 billion Hindus, Buddhists, Jains and Sikhs this way.
There are many ways to salvation or moksha. Similarly, there are many ways of expressing the art of surrender, submission, and devotion. Such devotion is called Islam in Arabic and bhakti in Sanskrit.
Hinduism teaches there are four paths to Yoga (union with God): Raja (meditation), Gnana (knowledge), Karma (good work) and Bhakti Yoga. No one path is better than the other and a person can follow one or all as per his or her prakriti (nature).
Hindus believe Moksha is possible for anyone who does good karma, irrespective of what name or shape is used to achieve this ultimate spiritual freedom. Interestingly, this also includes those who don’t believe in the existence of God (nastic).
God is all Knowing and full of perfect Wisdom. God is the only arbitrator armed with the Divine insight to pass judgment on us, not a human being. Therefore, it would be wrong for an individual or for a group to stereotype people from a certain faith as kafir or heathen.
On a personal note, the author got his last name AMIN because, in 1802, his great grandfather Nandlal saved the life of a Muslim king Nur Khan. It is not pleasant now to hear that Nandlal’s great grandson is a kafir. Alternatively, if the author (and his son) is not a kafir but a believer, his son will have no need to change his Hindu religion if a Muslim girl wishes to marry him.
This statement in the Quran 3:85, “If anyone desires a religion other than Islam, never will it be accepted of Him” (and Quran 3:19) may be interpreted as an exclusivist supremacist message. However, if God had willed, all humanity would have been of one single community, but God chose to make us diverse.
Some statements in the Quran could be of concern to the Hindus if they were to be seen as kafirs. However, they would automatically cease to be of concern if the deeper interpretation embraced the Hindus as believers in their own right, albeit belonging to a different religion.
Likewise, some statements by Lord Krishna in the Geeta could be disturbing for the Muslims and for the people of other Abrahamic faiths, if Krishna is perceived as a mere person and not the Ultimate.
Scriptures cannot be changed now, but we can learn to understand them in a historical perspective, and glean those statements which would help us to move forward in a spirit of positivity.
Interfaith marriage is the best tool to understand and explain pluralism.
A pluralist Muslim and Hindu couple would say:
For interfaith marriages, selective believing in the Quran 2:221 (interpreted as–a Hindu must convert for marriage with a Muslim) but ignoring Quran 24:30 (not okay to get into romantic relationship under the guise of true love) is a matter of concern.
An exclusivist supremacist will want the Hindu to convert for the Hindu-Muslim interfaith marriage because Hindus are non-believer kafir/heathen. There is no other reason to ask for conversion.
The author has guided some 800 youths in love relationship involving a Muslim and found that in most cases (90+%?) the Muslim will want the non-Muslim to convert to Islam for Nikah or want the children to be raised only in Islam.
The author’s survey found 45% of Muslims marry outside their faith in the USA. It is not clear  how many of these Muslims are true pluralists and are ready to raise children in both faiths.
Except Dr. Ghouse, Imam Iftekhar Hai and the Ismaili communities, the author has not found any Imam willing to conduct Hindu-Muslim marriages (read Sunni Muslim’s position).
Most Muslim majority nations will not approve Hindu-Muslim marriage and even have laws against it.
A Pakistani friend told the author that you will not find a single “Hindu”-Muslim couple in the whole of Bangladesh and Pakistan. And even if one such interfaith couple were to be found in these countries, they would be hounded and killed.
One can only hope and pray that such extremist individuals can espouse the spirit of pluralism and find it in their hearts to allow love to manifest through interfaith marriages. Compared to the distressing situation in these countries, one can find thousands of Hindu-Muslim couples living a dignified and harmonious life in India.
In a similar vein, for some exclusivist Christian churches, the Hindus are non-believer heathens. And so, before entering into a wedlock with their Christian partners, they are either expected to convert to Christianity or sign a prenuptial agreement stating that their offspring would be baptized and raised only in the Christian faith.
Note we are not against an individual’s religious freedom (to change faith), but against the mandate by religious institutions and faith leaders to link the (fake)conversion with an interfaith marriage.
To ask for religious conversion after years of romantic relationship is an ugly form of love proselytism and should be condemned. 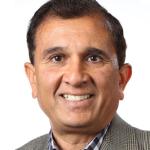 Dr. Dilip Amin: The author is a Director of the Peninsula Multifaith Coalition of the San Francisco Bay area and a certified speaker at Islamic Networks Group. He is a Dharma Ambassador and on the Advisory Committee at the Hindu American Foundation. He is a jail chaplain and a Columnist at Patheos. Dr. Amin has co-authored the book Hindu Vivaha Samskara. He founded the web forum InterfaithShaadi.org and guided 1200 youths and summarized his experiences in the book–Interfaith Marriage: Share & Respect with Equality. He is also the founder of HinduSpeakers.org.
Hindus are not kafir or heathen. The religious exclusivity and supremacist beliefs have often resulted in the practice of religious conversion in an interfaith marriage. True respect for others’ religious beliefs will bring peace and harmony in today’s world. It is time to give up the practice of religious conversion for interfaith marriages. 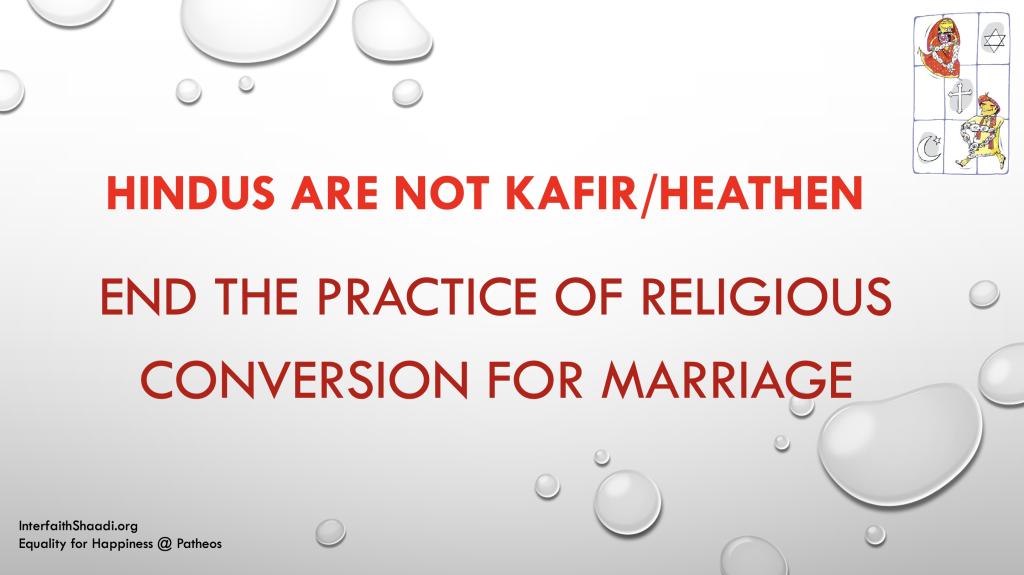 @@@
It is an open request for all faith leaders to endorse or reject this idea. Please share your views below.
Please forward this message to other faith leaders and ask them to clarify their position on this questionable practice of expectation of religious conversion for interfaith marriage.

2 thoughts on “Hindus are not kafir | Dilip Amin – Patheos”